A night at Elizabeth Bay House 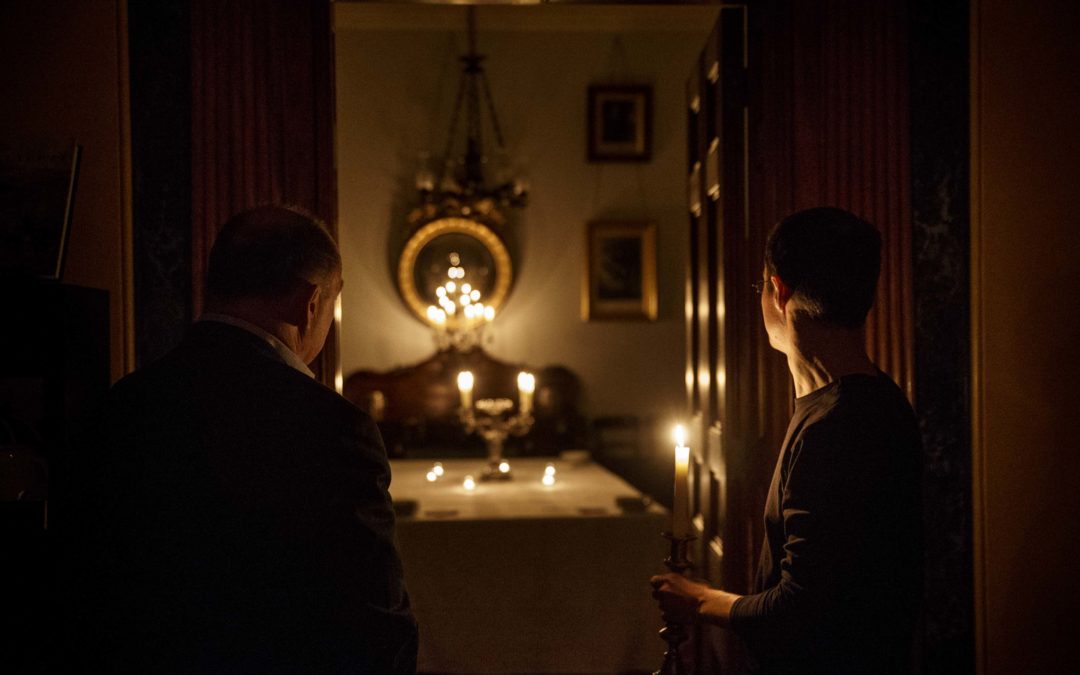 During History Week 2016, one of the History Council of NSW’s staff members, Amy Way, attended a special nightlight tour of historic Elizabeth Bay House. Hosted by Sydney Living Museums, the tour gave visitors the chance to see the rarely explored servant’s quarters, the wine cellars, and a nibble of wine and cheese by candlelight. Check out Amy’s account of the tour below.

I first visited the temple-like home of Alexander Macleay, a public servant and entomologist of colonial Australia, several years ago with my father. We were both awestruck by the sheer size of the place, built to be the finest house in the colony, and baffled by Macleay’s passion for a dream-home that eventually drove him to financial ruin. Last Friday was my first time back at Elizabeth Bay, and I saw a whole new side to the house as it came alive after dark.

The first thing I learnt was that life as an Elizabeth Bay House servant would not only have been difficult but also quite spooky. Our tour began with a clamber up the narrow servant’s stairs that ran up the back of the house, from the cellar all the way to the attic. At times almost vertical, and with only a flickering candle to guide you, I imagined what it would have been like for a maid dressed in weighty skirts and carrying her mistress’ chamber pot. Or when our tour guide told us of the tub-loads of hot water that had to be heated in the scullery and carried all the way up the back stairs to the master bedrooms on the first floor. Or the freezing winter nights and stifling summers spent in the attic quarters shared with several of your fellow servants.

Life for the Macleays and their descendants would have been much more comfortable: sitting beside their crackling fireplaces as the servants crept like mice through the walls and in the roof. Never mind that many of the fine interior features that Alexander had craved were never completed – chandeliers missing in the drawing room, for example – the house impressed us all with its finery as it glowed by candlelight. Freed from the usual ropes that protect the rooms during the day, our group roamed about the upstairs bedrooms and felt at home next to the heavily curtained windows and enormous, cushioned mattresses. I could easily have spent evenings exploring parts of Alexander Macleay’s natural history collection in his impressive library, or snuggled by the fire in the drawing room sewing with the Macleay’s six daughters.

My favourite part of the tour was watching our group’s shadows and silhouettes dance across the walls as we descended the iconic cantilevered staircase. From top to bottom, our candles lit up the saloon that forms the centre of the house, and for a moment I understood just a bit of Macleay’s architectural obsession and the desire to impress his neighbours. Finishing with a glass of wine and nibbles in the elegant dining room, this special tour gave me a new appreciation of one of my favourite historic houses. Seeing the usually blocked off servant’s quarters showed a side to the grand house that I had not seen before, and it forced me to reassess the house’s image and the story it tells its visitors.

Reflecting on our History Week theme of ‘Neighbours,’ there is little about Elizabeth Bay House that doesn’t shed some light on the place of neighbours and family in all of our lives, and indeed, in the legacies we leave behind us. There is so much history contained in the four walls (and hidden passageways) of Elizabeth Bay House that stretches even beyond the original Macleay inhabitants. I would recommend everyone take the time to pay a visit, by day and by night, so you can truly experience a piece of Sydney’s history.