Stories from the Sandstone Historian and History Council of NSW member Dr Peter Hobbins has just released a new book, Stories from the Sandstone: Quarantine Inscriptions from Australia’s Immigrant Past, with Ursula K. Frederick and Anne Clarke.

Combining intensive archaeological investigation and historical research, Stories from the Sandstone illuminates Australia’s past through the portal of these intriguing and often evocative inscriptions, as well as North Head’s numerous headstones. Drawing upon historical records, diaries and other writings, the book highlights the dramatic personal and social effects of diseases – such as bubonic plague, typhus fever, ‘Spanish’ flu and smallpox – that once terrified the community.

We learn where the authors of the inscriptions came from, why they left their homeland and what became of them. With well-researched text and fascinating contemporary and historical images, Stories from the Sandstone conveys the compelling personal stories of lives lived not just in despair, but also in hope for the future. The result is a captivating and intensely felt picture of the making of our society. 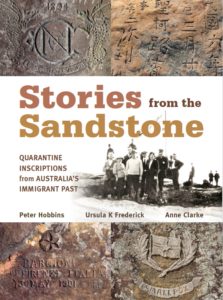