ADF and DEFGLIS march in the 2013 Mardi Gras Parade, Sydney 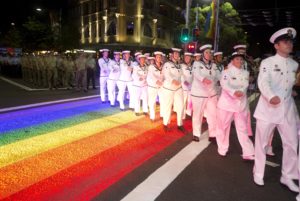 The ADF Contingent march on Oxford Street during the 2013 Mardi Gras Parade, Sydney.

Mid Caption:
The Defence lesbian, gay, bisexual, transgender and intersex (LGBTI) Information Service (DEFGLIS) began seeking permission from the chief of services in 2006 for ADF members to participate in the Mardi Gras in uniform.
2013 saw the ADF successful in the application with a contingent of 120 uniformed personnel march in the Mardi Gras Parade and a contingent of ex-Defence, public servants, families and friends involved in DEFGLIS able to proudly march amongst their peers.