Russel Ward’s great contribution to Australian history was the emphasis that he placed on history from below. He was passionate about the ways in which ordinary Australians had shaped the trajectory of the nation. While many of his conclusions have been challenged over the years, his approach to the study of the past is still very much relevant. This paper will explore the ways in which the digital revolution has enabled new understandings of the convict contribution to Australian society. It will also explore the impact that convict transportation had on convict bodies and their lives after sentence and the manner in which the state used criminality in order to justify the exploitation of convict labour. 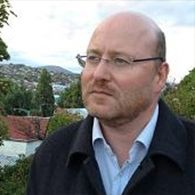 Hamish Maxwell-Stewart is a Professor of History at the University of Tasmania, best known for his knowledge of convict transportation and his use of colonial archives to explore intergenerational health issues. He is currently collaborating with researchers at the University of New England on the Landscapes of Production and Punishment project, which is exploring the physical and archival remains of the Port Arthur penal settlement. His publications include the prizewinning Closing Hell’s Gates (Allen and Unwin, 2008) and American Citizens British Slaves (Melbourne University Press, 2002).