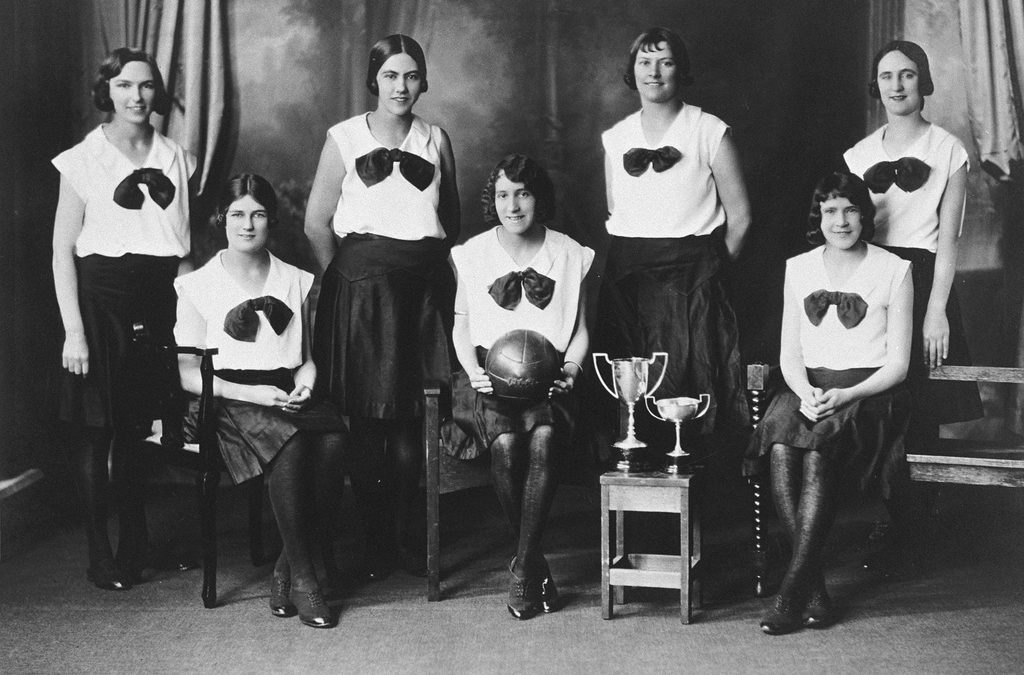 On 6 September 2016, the Department of Modern History at Macquarie University hosted a symposium in honour of History Week 2016: Neighbours. Check out the following three great essays from Macquarie University students, Alexandra Hawkins, Joanna Molloy and Jody Musgrove, as they reflect on the challenges and rewarding aspects of public history. Thanks go to Macquarie University and the three contributors.

This year to celebrate History Week, the State Library of NSW hosted a symposium organised by the Macquarie University Modern History Department. The symposium titled ‘Community Sporting Histories: Inclusion, Exclusion and Authority’ brought together a number of historians and academics in the fields of sporting history and public history. Whilst the day’s focus was centred around discussions of sporting communities and their histories, there was also important discussions about the potential challenges and benefits of engaging with public history.

Macquarie University historian Sean Brawley addressed the potential challenges historians can face when engaging with public history and local communities in his keynote address. He reflected on his own experience of writing a commissioned history for the Bondi Surf Club’s centenary. Brawley spoke about the tensions that can arise when a commissioned historian’s interpretation of the past conflicts with the narrative the organisation wants to perpetuate. In light of this, Brawley posed the following question; “Do we (historians) present history as we find it? Or how sporting communities wish to represent it?”

Reflecting on similar themes to Brawley, Fiona McLachlan from Victoria University discussed the difficulties she encountered when participating in a collaborative project to trace the history of Netball in Victoria. McLachlan highlighted how at times her own critical observations of the organisations past conflicted with their own celebratory goals. Presenters throughout the day did an excellent job of discussing the complexities, challenges and difficulties of conducting public history, posing thoughtful questions about the nature of this approach to ‘doing’ history. However, the real achievement of the day’s discussions was in the thoughtful ways the participants highlighted the enormous benefits and potentials of engaging with public history and community organisations when conducting historical research.

Macquarie University historians Shirleene Robinson and Tanya Evans spoke to the audience about the ways historians can use public history to give marginalised individuals and groups a place in the historical record. Robinson spoke about her experience of writing a thirty year history for the Sydney based football club the Flying Bats, which is one of the largest lesbian football clubs in the world. She emphasised how important using oral and public history was in creating a place in history where this organisations role in developing a lesbian culture and community in Sydney could be celebrated. Similarly, Evans spoke about her role in writing a history of the Spit Amateur Swimming Club in Sydney and argued that engaging in the creation of public histories like these fosters greater collaboration between academics and the local community, and as such has the potential to impact upon and reach a far greater audience. Whereas, Sport historian Murray Phillips argued that “digital history is public history” and demonstrated how historians can use digital technologies to produce e-histories which not only encourage transdisciplinary approaches to doing history but allow historians to present their research in more accessible ways.

The participants in Tuesday’s symposium demonstrated the complexities of engaging with public and local community organisations. Ultimately demonstrating how conducting historical research in this way is not only an innovative approach but can make a real difference to those marginalised individuals and groups who have until now been left out of the historical record.

Sports participation and sports spectatorship are often viewed as opportunities to be involved, to build communities and to celebrate being part of something positive. The speakers at this year’s History Week Symposium told stories of fierce loyalties towards clubs and staunch belief in narratives of origin. They explored themes of identity, division and parochialism, of rivalries based on notions of difference and beliefs about race, gender and sexuality. The symposium also explored issues of writing commissioned community sporting histories; the historian’s obligations, the need to include the community and the need to explain how historians use archives to construct their narrative. Many commissioned histories are celebratory in tone and must navigate established narratives and the question of who owns the sporting clubs history.

Fiona McLachlan spoke of the Netball Victoria project, and the practical way in which committed volunteers have been trained to gather oral history accounts of life members. While she thinks it important to tell the celebratory story, she also thinks it is important to test the silences and lived realities of this narrative and research areas such as discrimination and exclusion. This highlights the need for different forms of history for different purposes and audiences, a sentiment that was echoed by speaker Tanya Evans.

Keynote speaker Sean Brawley’s account of writing a commissioned history of Surf Live Saving in Australia and of the rivalries between Northern Beaches surf clubs of the honour of being ‘first’ sounded as much like a detective novel as an historical investigation. In addition to the captivating details of rivalry, intrigue and tampering with evidence, came an important lesson in historical truths and authority. Another approach to commissioned histories discussed at the symposium and applicable generally to history writing is that of the digital book. Online histories offer opportunities to change the linear nature of presentation and need to address the different reading patterns of online readership. In their approaches to sporting histories many of the speakers revealed discrimination and exclusion as an almost unspoken part of sport.

In his discussion of the rivalries between two Sydney AFL teams Keith Parry examined issues of supporter identity and their use of pre-existing rivalries between east and west Sydney. He interrogated social media posts and identified a range of outdated beliefs and community stereotypes. Histories of sporting communities do not often involve those who are excluded by sport. Images of great sporting nations neglect the lived realities of many. Many of the historians present had used oral history approaches to gather accounts of sporting experiences. Sporting stereotypes often exclude women and members of the LGBTQI community. In her research on the Flying Bats (an inclusive women’s football team) Shirleene Robinson used oral history interviews to record memories of gay women in sport and the documentary Scrum focused on the issues of gay men playing rugby for the Sydney Convicts (an inclusive, gay men’s rugby team). Both projects investigated the role of sport in marginalised communities and have wider implications for understanding gender and sexuality.

Histories of sporting communities can certainly offer stories of success, progress and celebration, but they also contain a wealth of opportunities to explore issues of identity and belonging, attitudes to race, class and gender and issues of interpretation and authority in history.

Macquarie University’s History Week symposium, Community Sporting Histories: Inclusion, Exclusion and Authority, was a day filled with rivalry and tension. A dozen historians spoke of communities – sometimes real, sometimes imagined – who worked with and against each other to stake their claims on space, place and their particular view of the past in the present.

Sean Brawley began the day by discussing the simmering tensions between Surf Life Saving clubs in Sydney’s eastern suburbs. The story he told was not just of neighbourly rivalry for bragging rights but also of the limits of commissioned histories. Sean’s trips to the archives may have revealed the clubs’ true origins, but it was not always the version of the past they chose to accept. At least now they all know the difference between a primary and a secondary source.

Western Sydney University’s, Keith Parry, moved the rivalry from the surf clubs of Sydney’s east to the ‘football’ clubs of Sydney’s west, and ultimately to the numerous sporting codes which vie for attention and support across the country. His sources were not to be found in libraries but in socioeconomic data sets and social media posts; an intriguing mix of demographics, statistics and personal opinions. Keith displayed maps of invisible lines which bounded communities, either willingly or unwillingly, and dictated sporting loyalties on both a local and a national scale.

After lunch, Fiona McLachlan from Victoria University gave voice to the ‘silent game’ of women’s netball. She worked collaboratively, not just with her client Netball Victoria, but also with fellow historians of all ages, thus sharing authority on a number of levels. Her work revealed hidden tensions between netball and other women’s sports which Netball Victoria perhaps had not foreseen when they commissioned the project. For the University of Queensland’s, Murray Phillips, the tension was not between clubs, codes or even sports but between media formats in the ongoing challenge of curating the past in a digital space. His pioneering work with the Australian Paralympic Movement questions the validity and therefore the longevity of the linear narrative which has been the mainstay of historical representation for many decades.

Later in the day, Shirleene Robinson took a more personal approach to a history of one of Sydney’s pioneering sporting communities, The Flying Bats lesbian soccer club. For the Bats, the rivalries were not just between the women and their opponents, but between the Bats and the men’s teams with which they vied for space on Sydney’s football pitches. Lacking much in the way of written records, Shirleene reconstructed the Bat’s history through the personal memories and mementos of the players. The story she told recalled their struggle for both playing space and for acceptance.

Thankfully, there was no rivalry or tension in the final panel discussion of the day. A group of historians discussed the new documentary Scrum, with Andrew Purchas the film’s executive producer and founder of the Sydney Convicts Rugby Club on which it was based. Andrew seemed genuinely delighted that the work had elicited such interested responses and so much debate.

Please note: the views above do not express the views of the History Council of NSW.