Celebrated poet Dorothea Mackellar became the first Australian woman writer to be honoured by UNESCO when the only known manuscript copy of her famous poem ‘My Country’ was officially included on the Australian Memory of the World register last week, on Thursday 9 February 2017. 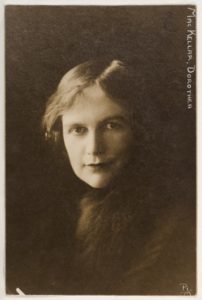 In a double first, the poetry notebook ‘Verses 1907-1908’, which records Mackellar’s creative output in her breakthrough year, when ‘Core of my heart’ (later ‘My Country’) was first published (on 5 September 1908), became the first Australian literary work to be added to the Australian register.

According to acting NSW State Librarian & Chief Executive, Lucy Milne: “Generations of Australians have come to cherish Dorothea Mackellar’s iconic verse and I am so pleased UNESCO has recognised this extraordinary writer who has left a permanent landmark in Australia’s rich literary heritage.”

Mackellar began writing ‘Core of My Heart’ while living in England between 1904 and 1908, inspired by her childhood experience of life on the land in the NSW Hunter region. As a young girl, holidaying on her family’s property, Dorothea witnessed the breaking of a drought and, after the rain, watched the paddocks turn green before her eyes. Her poem is an expression of her passionate attachment to the ‘wide brown land’ over the ‘green and shady lanes’ of England.

“In the century since ‘My Country’ was created, this single literary work remains for many the ultimate expression of the centrality of the land to Australian identity,” says State Library curator Margot Riley.

The only known manuscript version of the poem in its original final form was recorded in Mackellar’s notebook, ‘Verses 1907-1908,’ currently on public display in the State Library’s AMAZE Gallery.