As part of the History Week Speaker Connect program, Sydney Mechanics’ School of Arts will host journalist and speechwriter Michael Bodey on 5 September 2019.

50 Secrets of Surry Hills and Redfern

Newly released book 50 Secrets of Surry Hills & Redfern reveals just how vibrant local history can be – particularly in inner-city Sydney. In this lecture, journalist, author and speechwriter Michael Bodey explores the rich history and the personal stories, oddities and peccadilloes of Redfern and Surry Hills.

Take an entertaining ride through two idiosyncratic suburbs that evolved from once scrubby grasslands to become multicultural enclaves, home to early Australian industry and spiritual home to Indigenous Australians. Celebrate the bohemia, crime and cosmopolitan nature of suburbs that developed from the earliest land grants and feature everything from the Victoria Barracks and Centennial Park in the east to The Block in the west.

50 Secrets of Surry Hills and Redfern is an innovative project offering another way into historical storytelling. The book was researched, written, designed and published by three parents of Bourke Street Public School as a fundraiser that has already sold more than 1000 copies. Michael Bodey will explain how the project evolved, what can be learned from their novel process and how vibrant local history can be – particularly in inner-city Sydney. 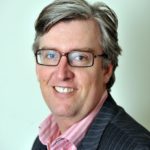 Michael is an author, journalist, broadcaster, speechwriter and strategist. His journalism and broadcasting has focused on film, media and show business, after a former career as a marketing executive. He is the author of four books, and is currently a media director and speechwriter within a NSW government department and weekly contributor to Radio National’s Breakfast with Fran Kelly and Steve Price’s Afternoon show.